(The post was written by Kennady Vijayalakshmy, a consultant scientist with ILRI in South Asia.)

An International Crops Research Institute for the Semi-Arid Tropics (ICRISAT)-led Government of Karnataka–CGIAR initiative is demonstrating proven livestock technologies for scaling in Karnataka. The project has carried out a series of livestock development activities in 16 villages in four districts of Bhoosamrudhi (Bidar, Udupi, Dharward, Chikballapur) in the state.

Under this collaborative project, the International Livestock Research Institute (ILRI) is implementing livestock feed balancing activities. The institute has developed an ‘on-farm advisory tool’ that is currently undergoing field testing using the feed database developed for the three districts of Bidar, Chaikballapur and Dharward. 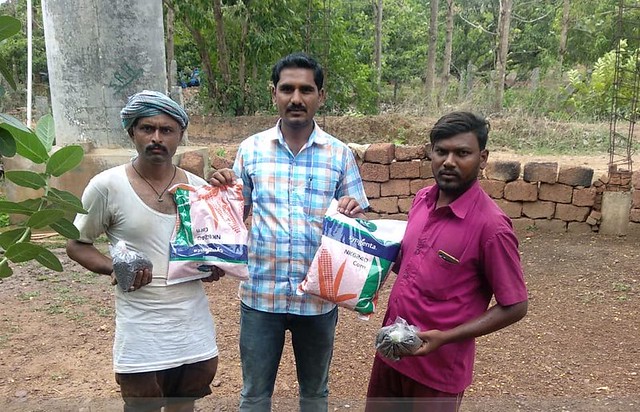 The project is promoting dual-purpose crops with superior fodder quality. NK6240 dual-purpose maize hybrid seeds have been supplied to 93 farmers in three districts to cover 47 acres in the ‘Kharif’ crops season (Kharif crops are sown at the beginning of the rainy season). The project is also supporting the promotion of forage cultivation and seeds of a promising fodder crop variety, COFS29, have been supplied to 58 farmers who are growing them in 29 acres in the three districts during the Kharif season.

The Karnataka government–CGIAR initiative is helping farmers produce silage bails in the fodder processing unit in Neelavaram Goshala where enriched silage will be made using mission grass and legume (groundnut, green gram, mung bean) haulms in the proportion of 65:35 by using the mini baler-cum-wrapper, which was installed last year. A private feed producer/entrepreneur has also been identified to produce enriched silage as a commercial product and supply it to dairy farmers in the project district during the lean season.