The International Livestock Research Institute (ILRI) and Vietnam’s Ministry of Agriculture and Rural Development (MARD), in a recent (25 June 2015) high-level meeting between ILRI and MARD in Hanoi, developed a strategic plan to boost the partnership between the two organizations for the next five years. 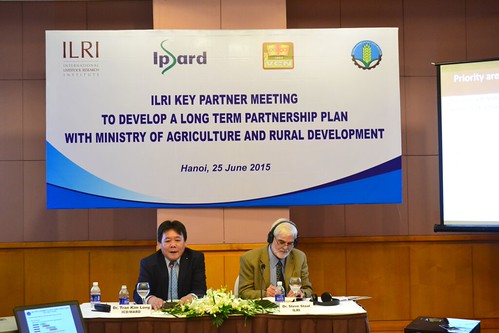 The meeting was co-chaired by Tran Kim Long, director general of the International Cooperation Department (ICD) of the Ministry of Agriculture and Rural Development (MARD), and Steve Staal, ILRI’s regional representative for East and Southeast Asia (photo credit: ICRAF/Tran Ha My).

The meeting, which followed earlier discussion on ways in which ILRI can better support Vietnam’s livestock sector development goals, identified research and capacity development activities to help implement the country’s policy on restructuring the livestock sector.

The meeting also agreed on initial short-term priorities and next steps for resource mobilization and implementation.

The meeting brought together officials and representatives from MARD, including the International Cooperation Department (ICD) and the Department of Livestock Production (DLP), and key research institute and universities, namely, the National Institute for Animal Science (NIAS), the Institute of Policy and Strategy for Agriculture and Rural Development (IPSARD), the National Institute of Veterinary Research (NIVR), Vietnam National University of Agriculture (VNUA), in addition to several ILRI lead staff. Other partners from the health and environment sector, such as the Vietnam Food Administration (VFA), Hanoi School of Public Health (HSPH) and the Institute for Agricultural Environment (IAE), also attended the meeting. 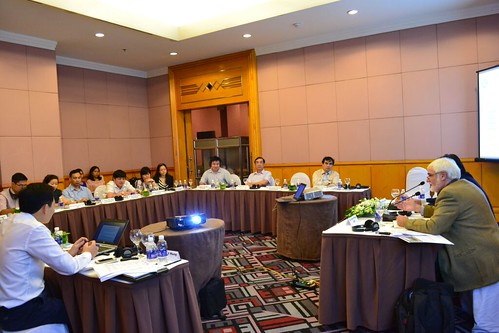 The meeting’s overall objective was to develop a strategic plan on partnership between ILRI and MARD for the next five years (photo credit: ICRAF/Tran Ha My).

Taking it further: Outcomes and next steps

Co-chaired by Tran Kim Long, the director general of ICD, and Steve Staal, ILRI’s regional representative for East and Southeast Asia, the meeting agreed that partners in the meeting would increase their collaboration in efforts towards improving the competitiveness and livelihoods of smallholder livestock farmers, particularly in challenging livestock production areas as described in the country’s livestock restructuring plan.

The organizations also agreed to work together in researching genetic resource conservation of local breeds, competitiveness and productivity of smallholder farmers, value chains, food safety and disease risk, and livestock and environment interactions. 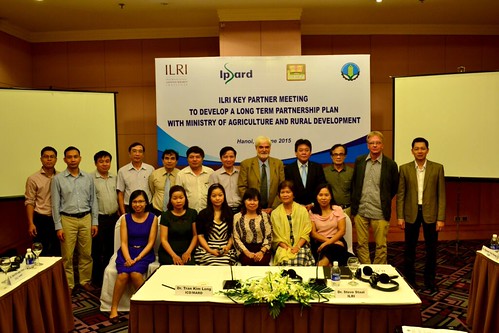 ILRI and MARD were joined by officials from MARD’s key departments, as well as representatives from research institutes and universities (photo credit: ICRAF/Tran Ha My).

For the next steps, MARD and ILRI will identify specific teams of focal points around each priority area and develop resource mobilization and implementation plans. An agreement on partnership modalities (finances, management, sharing), and an effort to mobilize resources to implement the areas identified from the meeting have been added to the revised memorandum of understanding (MOU) that ILRI and MARD will sign in August 2015.