Making the world safe from the threats of zoonotic diseases and ensuring effective management of antibiotics requires a well-coordinated multisectoral effort.

This was one of the key messages coming out of this year’s Prince Mahidol Award Conference (PMAC 2018), a global public health platform organized from 29 January to 3 February 2018 in Bangkok, Thailand.

Senior scientists from the International Livestock Research Institute (ILRI) participated in a number of sessions during the week-long event, which highlighted the importance of managing emerging infectious diseases and antimicrobial resistance risk in the livestock sector. 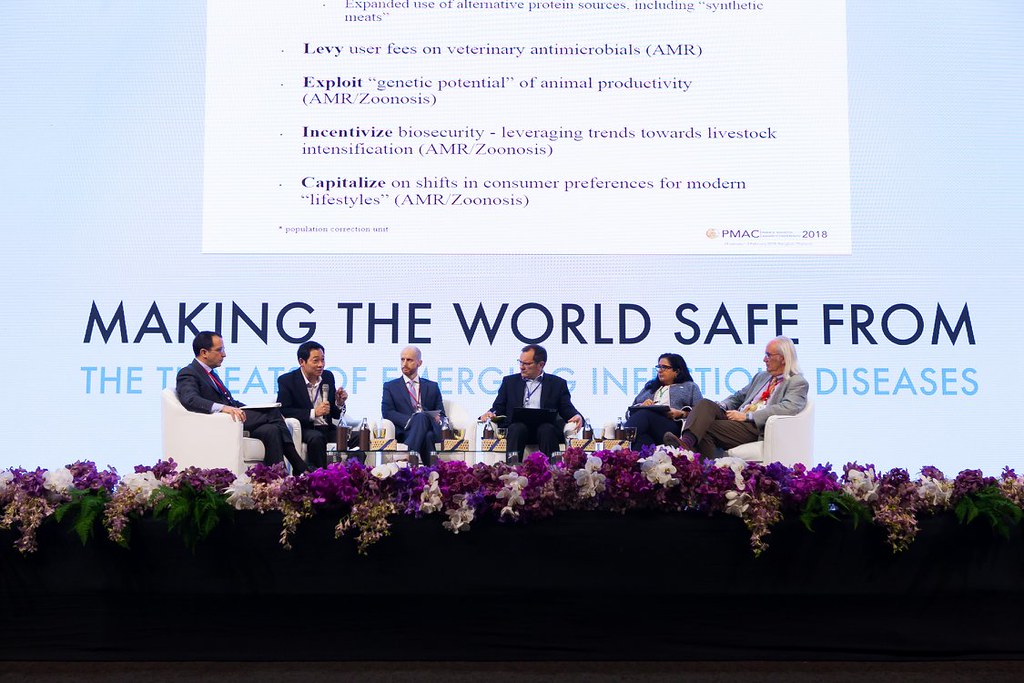 Zoonotic diseases are defined by the World Health Organization as diseases that can be transmitted from animals to people. Antimicrobial resistance (AMR) is the ability of a microorganism (like bacteria, viruses, and some parasites) to stop an antimicrobial (such as antibiotics, antivirals and antimalarials) from working against it.

Zoonotic and AMR-related diseases reportedly accounted for more than 95% of all emerging infectious diseases during the second half of the 20th century but they are ‘the neglected dimension of global health security’, said Peter Sands, director of Global Fund, at the conference.

Global antimicrobial consumption in livestock is forecast to rise by 67% by 2030. In Asia only, antimicrobial use in poultry and pork production will rise by 129% and 124%, respectively by then.

At a plenary panel on ‘Managing emerging infectious disease and AMR risk across the livestock revolution’ in the conference, Hung Nguyen, ILRI senior scientist on EcoHealth and regional representative for East and Southeast Asia, highlighted the importance of livestock in the context of food security and the challenges the livestock sector faces in developing countries in managing antimicrobials use and AMR. Little is known about antimicrobials use in agriculture or how close interactions of livestock and people in smallholder production systems relates to the emergence of AMR. But antimicrobials use in these countries is estimated to be higher than in developed countries. For example, Hung said, 200-500 milligrams of antibiotics are used to produce one kilogram of live pig in Vietnam compared to 50 milligrams used to produce the same amount of pig in Denmark.

‘We are about to move to a phase to propose some actionable measures to control AMR and zoonotic diseases, especially in developing countries.’

PMAC 2018 provided an important platform for promoting policy and strategic action by engaging multisectoral experts in zoonosis and AMR, mobilizing initiatives and resources from both public and private sectors, international organizations, research academia and civil society.

The conference was attended by about 1,200 top world public health experts from 85 countries.