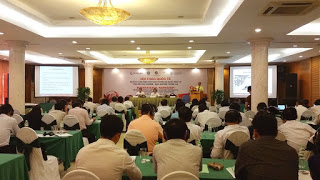 Livestock sector experts and stakeholders in Vietnam recently met to discuss the opportunities and challenges offered by the newly unveiled Trans-Pacific Partnership (TPP) and other trade agreements and their likely effects on the country’s livestock industry.

The ‘Vietnam Livestock Sector in Economic Integration Experiences Sharing—Future Orientation’ workshop brought together representatives from the Ministry of Agriculture and Rural Development (MARD), the International Livestock Research Institute (ILRI) and other development partners in the country to assess how the Vietnam’s livestock sector is collaborating with other players in light of the new trade agreements.

In a presentation on behalf of Lucy Lapar, an agricultural economist at ILRI, Unger said Vietnam’s livestock sector should use the opportunities offered by global and regional integration to strengthen markets, produce and sell higher quality livestock products, and establish a livestock sector coordination group.

Nguyen said food safety remains a key challenge in developing countries such as Vietnam, in particular, food-borne diseases, which affect the sale and consumption of livestock products in the informal sector. He said there is need to balance food safety management between the formal and informal sector by training value chain actors in areas such as inputs use and good practices and certification of food vendors to promote food safety. He said the informal sector, which comprises most of the country’s smallholder farmers, remains a key source of animal source foods in the country.

TPP is a free trade agreement among 12 countries including Vietnam that aims to promote economic growth among member states. This agreement also seeks to lower or remove trade barriers such as tariffs and trade disputes. It was drafted on 5 October 2015.

TPP is perceived as favourable to export companies but not so much to sectors with low levels of competitiveness. At present, production costs of livestock products are higher in Vietnam, compared to the United States or Japan, because of Vietnamese farmers’ reliance on imported feed. There are also some concerns related to control of diseases, food safety and environmental protection.

According to Nguyen Xuan Duong, deputy director general of the Department of Livestock Production of MARD, Vietnam’s livestock industry is undergoing a restructuring process that will focus on improving the competitiveness of its smallholder farmers and upgrading its food safety standards.

In order to effectively respond to the challenges of economic integration brought about by TPP, Vietnam is accelerating the comprehensive restructuring of its livestock sector and its regional livestock production, farming methods and value chains.

The government is also supporting the World Bank-funded Livestock Competitiveness and Food Safety Project (LIFSAP), which aims to improve the competitiveness of household-based livestock producers by addressing production, food safety and environment risks in supply chains.

The workshop was co-organized by MARD, LIFSAP, ILRI, the Food and Agriculture Organization of the United Nations (FAO) and the World Bank. It was held in Hanoi on 27 October 2015.

Learn more about ILRI and MARD’s long-term partnership for livestock development in Vietnam.