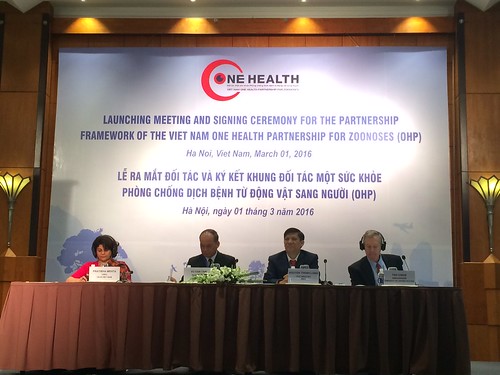 In an effort to step up control of zoonotic diseases, or diseases transmitted from animals to humans, the framework for One Health Partnership for Zoonoses (OHP), an initiative by the Vietnamese government, was officially launched in Hanoi on 1 March 2016.

Supported by 27 Vietnamese and international agencies, including the Ministry of Agriculture and Rural Development (MARD), a key partner of the International Livestock Research Institute (ILRI) in the country, the initiative will support Vietnam and Indonesia, two of the focus countries for the Zoonotic Diseases Action Package (ZDAP) and the Global Health Security Agenda (GHSA), to address the growing threat of infectious diseases.

According to Vu Van Tam, vice minister at MARD, the partnership will focus on sharing research among OHP national and international partners, giving recommendations for One Health policy, strategy and research projects, and enhancing international cooperation to better coordinate and promote One Health efforts in Vietnam.

One Health and its relevance to Southeast Asia

One Health is a multi-disciplinary approach to achieving optimal health for people, animals and the environment through local, regional and global research collaboration. The use of One Health approach has been gaining ground in Southeast Asia due to the rise of cross-species epidemics such as avian influenza and severe acute respiratory syndrome (SARS).

The region is a known hotspot for these diseases that not only cause serious damage to human health, livelihoods and the environment, but are also expected to occur more often in the coming years due to intensified livestock production and rapid urbanization in the region.

The OHP framework launch was co-organized by MARD, the Vietnam Ministry of Health, the United Nations and the United States Embassy. Officials and scientists from national and international agencies working in the region also attended the event.

For more news and announcements, go to One Health website.

Read the article on 2014 Hanoi workshop on One Health.