The Government of Vietnam has started strengthening coordination among ministries, engaging the private sector and social organizations, improving risk communications to raise awareness of the public, and developing the capacity of laboratory networks to better manage food safety risks.

These and other measures were recommended in a World Bank-prepared report on food safety management in the country, which was requested by government. It was released in 2017.

Speaking at a meeting on ‘Reforms in food safety for sustainable development’ on 18 April 2018 at the World Bank office in Hanoi, Vietnam’s deputy prime minister, Vu Duc Dam said the government is working with the World Bank and development partners to address food safety challenges in the transition towards more modern and formal value chains. 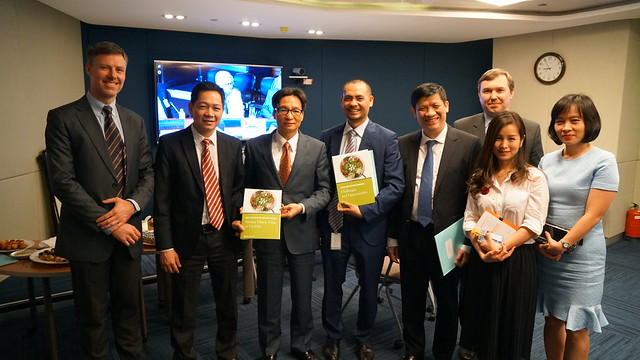 Although Vietnam has a relatively modern regulatory framework on food safety for export products, there is need for better regulation in the domestic market. With an emerging tiger economy, the Vietnamese now have more money and more food choices in ever-growing food supply chains, and this makes food safety a top priority for the government.

The report proposed that the Vietnam government enter a trilateral memorandum of understanding (MoU) with the World Bank and the Dutch Government in July 2017 in which they would join forces to develop a project in three big Vietnam municipalities of Hanoi, Hai Phong and Ho Chi Minh City to improve food safety.

The ‘Food safety risk management in Vietnam: challenges and opportunities’ report was prepared by the World Bank and other research and development partners at the request of the Government of Vietnam. The International Livestock Research Institute (ILRI) was the lead technical partner in the report’s development. It was launched in March 2017.

Read about the launch of the Food safety risk management in Vietnam report.