Antibiotic resistance, a phenomenon where diseases caused by bacteria in humans and animals become harder to treat because the antibiotics used to treat them become less effective, is one of the biggest threats to global health. About 70 antimicrobial resistance (AMR) experts in South and Southeast Asia recently joined forces to discuss the challenges impeding efforts to combat AMR and identify ways to better coordinate AMR interventions in the region.

The policymakers, human and animal health researchers, investors actors from Bangladesh, Cambodia, Laos and Vietnam met at a One Health and AMR research coordination workshop on 7–9 October in Hanoi to:

Antibiotic resistance can affect anyone of any age, in any country. The misuse of antibiotics in humans and animals is accelerating AMR making the treatment of infections such as pneumonia and salmonellosis much more difficult. The rise of AMR threatens not only global health, but also food security and development. 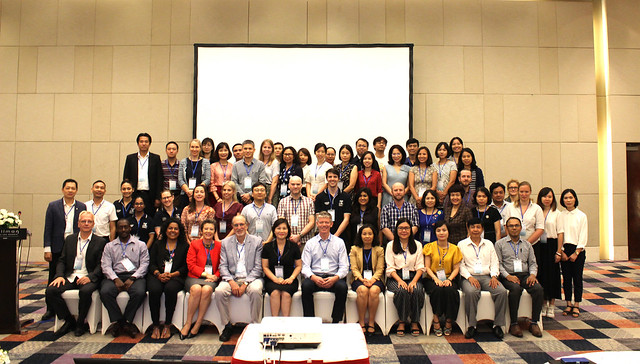 Pham Thi Ngoc, director general of the Vietnam National Institute of Veterinary Research (NIVR); Hung Nguyen, International Livestock Research Institute (ILRI) regional representative for East and Southeast Asia; and Jeff Waage of the London Centre for Integrative Research on Agriculture and Professor at the London School of Hygiene and Tropical Medicine (LSHTM) and the CGIAR Research Program on Agriculture for Nutrition and Health (A4NH), were among the speakers at the workshop. National and international initiatives on managing AMR and antibiotics were presented in plenary and during a poster session.

‘The CGIAR AMR Hub, one of the initiative presented at the workshop, is led by ILRI. It was launched February 2019 to convene and facilitate interactions between different stakeholders working in AMR, including CGIAR partners and national and international partners.’

The workshop’s discussions centred on finding ways of coordinating future work on AMR in South and Southeast Asia. Many panellists called for better collaboration and knowledge sharing among the different sectors in the One Health sector. Katinka de Balogh from the Food and Agriculture Organization of the United Nations (FAO), however cautioned that the many layers of collaboration in AMR research in animal health, human health and agriculture could lead to duplication of efforts and insufficient use of resources.

‘Collaboratively, we can do a lot more than any of us can do alone,’ Hung Nguyen, ILRI.

Sothyra Tum, director of the National Animal Health and Production Research Institute of Cambodia (NAHPRI) said collaboration between countries would strengthen AMR surveillance and communication efforts.’ Participants from Bangladesh, Cambodia, Laos, and Vietnam also called for the strengthening of AMR surveillance in developing countries. They underlined the lack of data on AMR, its impact on health and its socio-economic burden and stressed the need to improve data collection and sharing on a systematic level throughout the region. 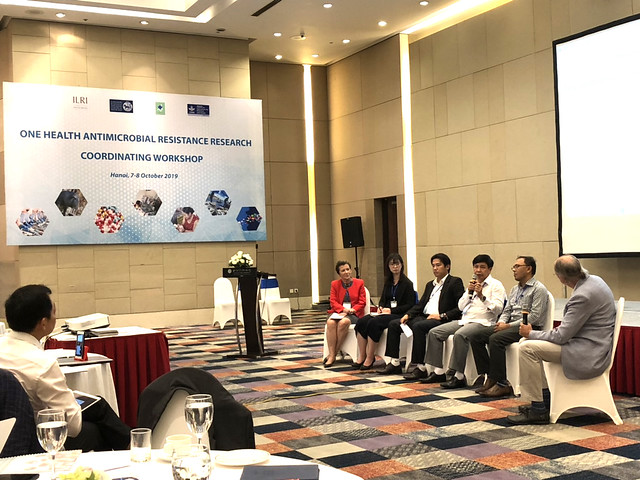 Many panelists from South Asia and Southeast Asia call for better collaboration and knowledge sharing among the different sectors in the One Health sector (photo credit: ILRI/Chi Nguyen).

Major gaps in AMR research including the need for translation of AMR knowledge into sound political actions were identified at the meeting. ‘Data from all the research projects needs to be communicated effectively to policymakers’, said Vo Ngan Giang from FHI 360 who coordinates a Fleming Fund-led initiative that is supporting AMR surveillance work in Vietnam.

Participants said that fundamental, translational and clinical research must provide innovative solutions to address infection prevention, diagnosis, and treatment to prevent and combat AMR in animal research. Besides discussions on AMR research in poultry and pig production, participants agreed that further research on aquaculture systems was needed.

Over the next few months, a group of eight researchers who attended the workshop volunteered to refine all these discussions into concept notes that highlight common goals to support between One Health and animal research sectors’ efforts to tackle AMR in the region.

The workshop was co-hosted by ILRI, NIVR, LSHTM and funded by A4NH.