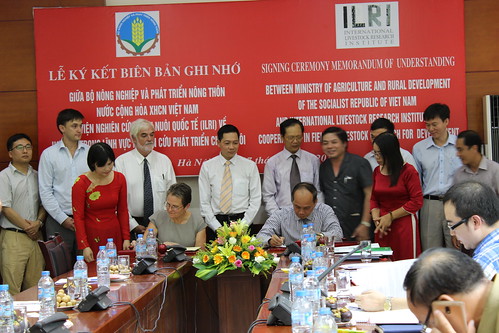 A new agreement between the International Livestock Research Institute (ILRI) and the Ministry of Agriculture and Rural Development (MARD) in Vietnam will boost efforts towards improving the competitiveness and livelihoods of smallholder livestock farmers in the country.

The revised memorandum of understanding (MoU), which was signed on 17 August 2015 in Hanoi, will increase cooperation between MARD and ILRI in livestock sector research and development in Vietnam.

Signed by Shirley Tarawali, Assistant Director General at ILRI, and Vu Van Tam, the Vice Minister of MARD, the new MoU updates a previous agreement signed in 2007 and will focus on priority smallholder livestock development areas described in the country’s livestock restructuring plan including

2. Conservation and utilization of animal genetic diversity including indigenous pigs and chickens 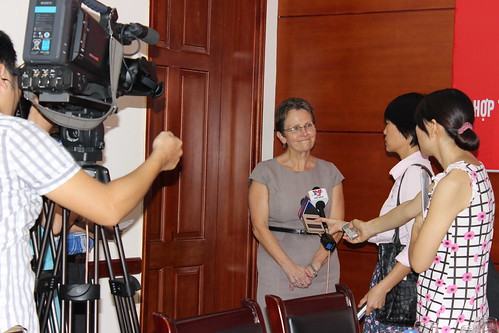 ILRI Assistant Director General Shirley Tarawali being interviewed during the signing ceremony, which was covered by local Vietnamese media, including the Voice of Vietnam (photo credit: ILRI/Thinh Nguyen).

Under the new accord, ILRI hopes to establish a long-term partnership with MARD, which will, among other goals, seek to align livestock research for development with national policy and the country’s livestock sector restructuring plan.

ILRI and key Vietnamese partners then discussed the long-term partnership plans after the signing ceremony. 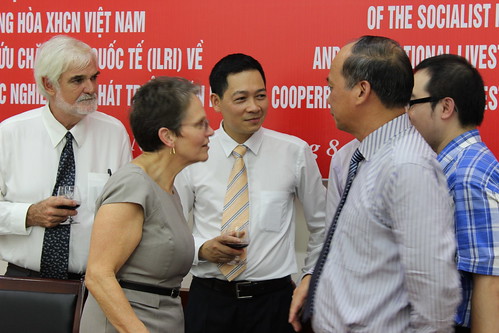 At present, CGIAR is developing a new set of research programs that will work through a number of ‘CGIAR collaboration countries’, including Vietnam, where CGIAR centres and programs will work more closely with the relevant national authorities to bring together research results from CGIAR and national partners to address national development challenges.

Learn more about the high-level meeting held in June 2015 that preceded this signing ceremony.